Last week, the Johns Hopkins Center for Gun Violence Solutions released “A Year in Review: 2020 Gun Deaths in the U.S.”, which illustrates the enormous toll of gun violence using the recently released 2020 CDC firearm fatality data. As we struggled against the global COVID-19 pandemic, a concurrent, uniquely American public health crisis intensified. 2020 saw the highest number of gun-related deaths ever recorded by the CDC and a sharp increase in gun homicides. Here are a few of the takeaways: 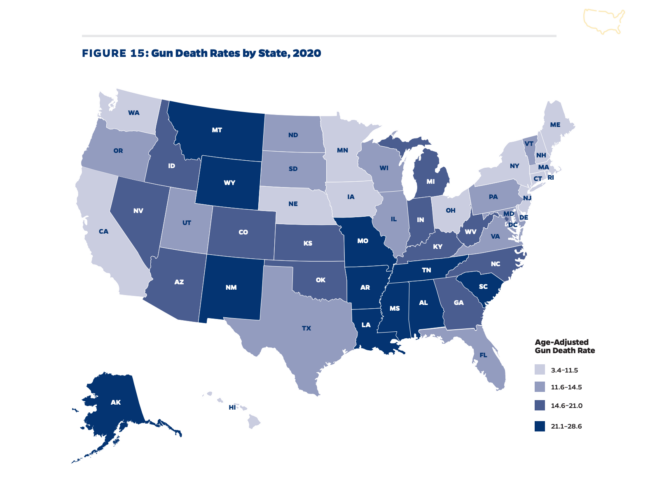 The report emphasized the importance of Extreme Risk Protection Orders (ERPOs), which allow individuals to petition a court to temporarily separate someone at risk of harming themselves or others from their firearms. Community Violence Intervention (CVI) Programs were also highlighted as central to solving the root issues of gun violence. Both of these life saving tools exist in Washington: Initiative 1491 established ERPOs in 2016, passing with 71% of the vote, and the Office of Firearm Safety and Violence Prevention received $8.4 million this past legislative session to invest in CVI programs in Washington State. The final recommendation was that states should establish a permit-to-purchase system, which currently exist in just nine states but are associated with lower rates of diversion of guns for use in crime, homicide and suicide by firearm, mass shootings, and shootings by police.

In 2020, the outbreak of COVID-19 exacerbated the ongoing gun violence epidemic impacting individuals, families, and communities. This report illuminates how gun violence disproportionately impacts both communities of color, young people, and those in the most rural communities. Fortunately, this crisis of gun violence is preventable: evidence-based, common sense gun violence solutions are saving lives.

– Hazel Brown is Policy and Advocacy Coordinator with the Alliance

The arts have always been a place both to inspire and seek inspiration. On April 20th, 2022–the 23rd anniversary of the Columbine...