Every 16 hours, a woman in the United States is fatally shot and killed by a spouse or intimate partner. In Washington state alone, more than 50,000 domestic violence incidents are reported annually. Research shows that the presence of a gun in a domestic violence situation increases the risk of homicide by 500 percent. 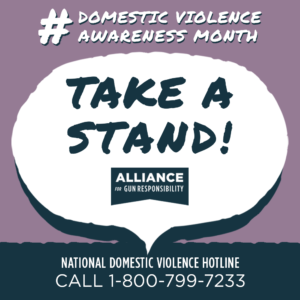 October is Domestic Violence Awareness Month, a time to shine a light on this pervasive issue. Trese, Courtney, and Dana are doing just that:

One of the surest ways to protect victims and reduce gun deaths is to disarm domestic abusers. Thankfully, Washington state has some of the strongest laws in the nation designed to address the deadly intersection of gun violence and domestic violence.

Victim Protection (HB 1840)
This law helps keep victims safe by ensuring that individuals subject to domestic violence and other protection orders surrender their firearms if the court feels they pose a threat. This law led to the creation of the first-of-its-kind Regional Domestic Violence Firearms Enforcement Unit (RDVFEU), a multi-disciplinary unit dedicated to firearm surrender in Seattle and King County. In its first year of operation, the unit seized 466 firearms in King County. The RDVFEU has served as a model for counties across the state and country working to better enforce firearm surrender laws.

Expanded Background Checks (Initiative 594)
Initiative 594 requires background checks on all gun sales, closing a deadly loophole that allowed criminals and other dangerous individuals to avoid background checks by purchasing firearms through “private sellers” at gun shows, on the internet, and elsewhere. Nationally, one in nine background check denials are domestic violence related. Ensuring background checks are required for all firearm sales and transfers is crucial to keeping guns out of the hands of domestic abusers.

Law Enforcement and Victim Notification (HB 1501)
This law helps keep our communities safe by creating stronger enforcement when a prohibited person illegally tries to purchase a firearm.  It also requires notification of law enforcement and victims when felons, domestic abusers and other ineligible people illegally attempt to purchase guns. This gives survivors an opportunity to proactively take steps to keep themselves and their families safe. Washington was the first state in the country to notify victims when an illegal attempt takes place.

Strengthening Protection Orders (SHB 1786)
This bill helps keep guns out of the hands of people with a history of violence by strengthening our protective order system and helping ensure firearms are removed from crisis situations.

To learn more about domestic violence protection order and firearm surrender laws in Washington state and across the country, visit DisarmDV.org.

— Kristen Ellingboe is the Communications Manager at the Alliance for Gun Responsibility.

October is National Domestic Violence Awareness Month  SEATTLE, WA – Every 16 hours, a woman in the United States is fatally shot and...