Shalisa Hayes: Why I Fight

Almost nine years ago, my son Billy Ray Shirley III, was stolen from me in a senseless act of gun violence. He was just 17 years old.

The sad truth is I am not alone in my loss. I am one of far too many mothers—far too many people—who have experienced the devastating pain of losing a loved one to gun violence. 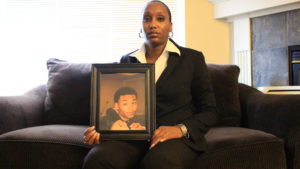 Today marks the start of National Gun Violence Survivors Week. Early February marks the approximate time that the number of gun deaths in the United States surpasses those experienced by our peer countries in an entire calendar year.

This is a time to recognize every life that has been impacted by gun violence, from the 100,000 people who are injured by guns each year, to those who experience the trauma of shootings firsthand, to the countless people like me who have lost a loved one to this epidemic.

We know all too well that the impacts of gun violence are far reaching and long lasting. You do not have to be shot to be a survivor of gun violence.

Gun violence impacts each and every one of us, but it does not impact all our communities equally.

I know that behind those statistics are mothers like me whose lives have been forever altered by the pull of a trigger. That is why I work to support other mothers of slain children and young people in my community in any way possible. And it is why I work with the Alliance for Gun Responsibility.

I believe that together we can create a future where no parent has to go through what I have.

— Shalisa Hayes is Executive Director at The Billy Ray Shirley III Foundation and Consultant at Shalisa Hayes, LLC. She is also a member of the Alliance for Gun Responsibility Foundation’s Board of Directors.

What began as a chance meeting between two Bellevue, WA residents at a summer meeting of Indivisible Eastside in June of 2017, culminated...