Fred Guttenberg, whose 14-year-old daughter Jaime was killed at Marjory Stoneman Douglas High School in Parkland, Florida almost two years ago was an honored guest of Speaker Nancy Pelosi at the State of the Union address. 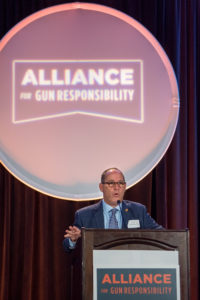 During the speech, President Trump made no mention of the nearly 40,000 Americans that die from gun violence every year. Instead, he claimed the Second Amendment was “under siege” and vowed to “always protect your Second Amendment right to keep and bear arms.” Fred, in a moment of frustration, called on the president to acknowledge victims of gun violence like his daughter Jaime. He was promptly escorted out of the room.

Since Parkland, Fred has worked tirelessly for commonsense laws that will help put an end to gun violence. He spoke at our luncheon last year about the urgency of this crisis and he has visited every corner of the country calling on elected officials to act.

One of the changes he’s fighting for is Jaime’s Law, which would, among other things, require background checks on ammunition sales. We’re fighting for the same thing right here in Washington state because we know that keeping ammunition out of dangerous hands is a proven way to reduce gun violence and save lives. It’s one of the many policies we are advocating for during this legislative session.

Our opponents are energized and they are doing everything they can to fight any and every commonsense gun safety measure. We need your help to make sure we get vital gun safety measures — like background checks on ammunition sales — over the finish line.

Here are four things you can do right now to fight for gun safety:

We’re so proud of all that Fred has done for the GVP movement and we’ll continue standing with him as he honors Jaime’s life with action.

— Maureen McGregor is Strategic Engagement Director at the Alliance for Gun Responsibility.

Shalisa Hayes: Why I Fight

Almost nine years ago, my son Billy Ray Shirley III, was stolen from me in a senseless act of gun violence. He was just 17 years...